Comfort Dining of the Highest Order 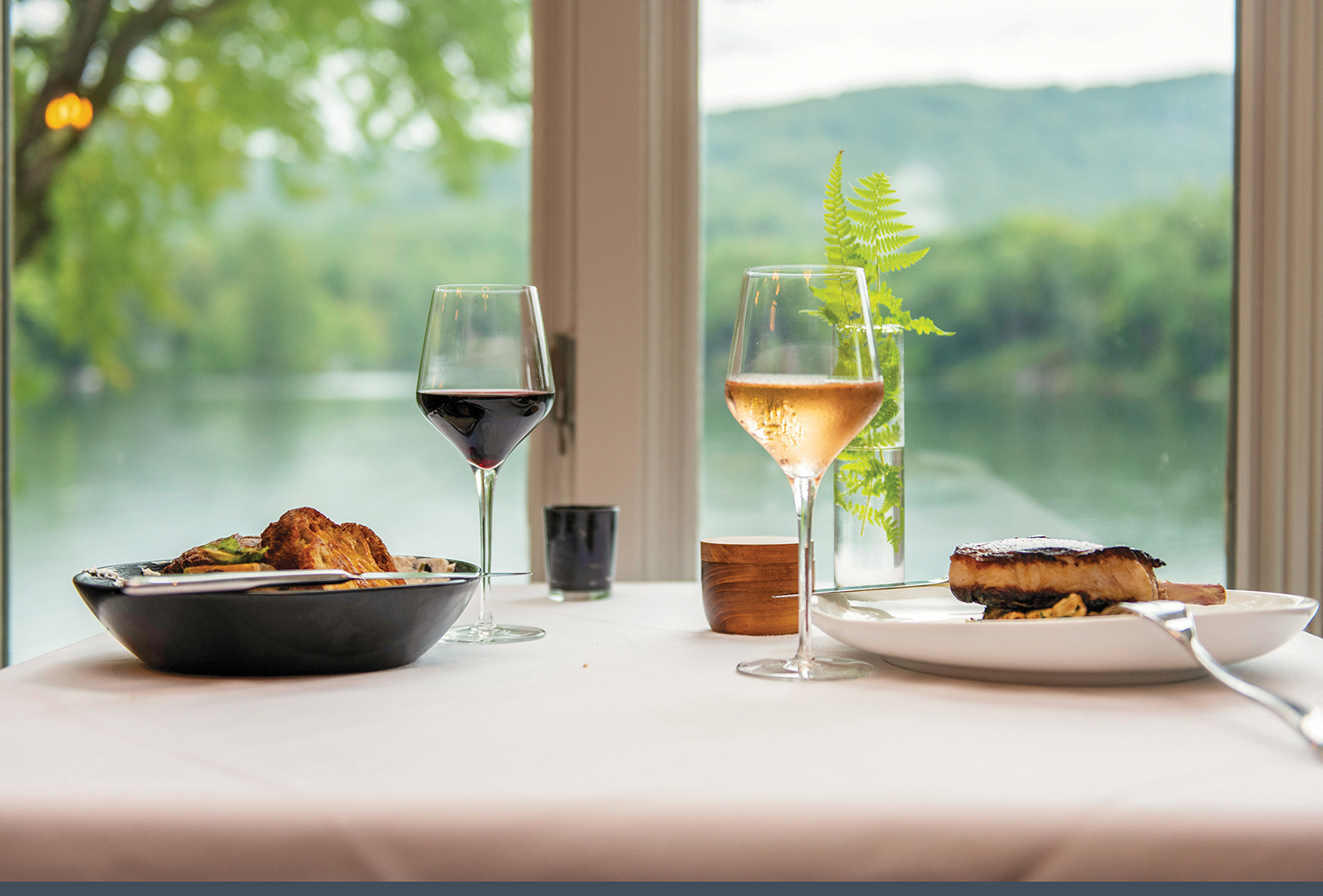 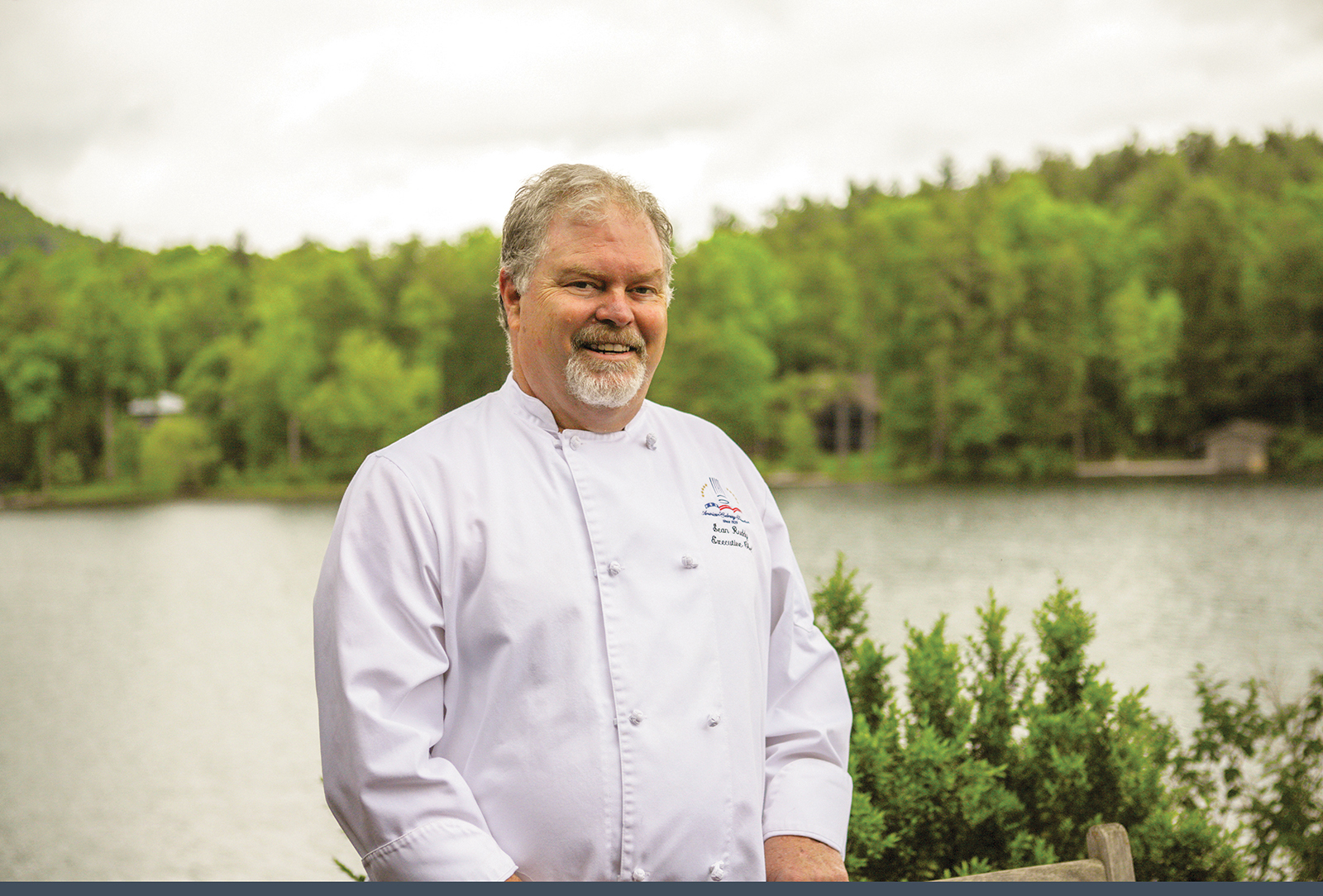 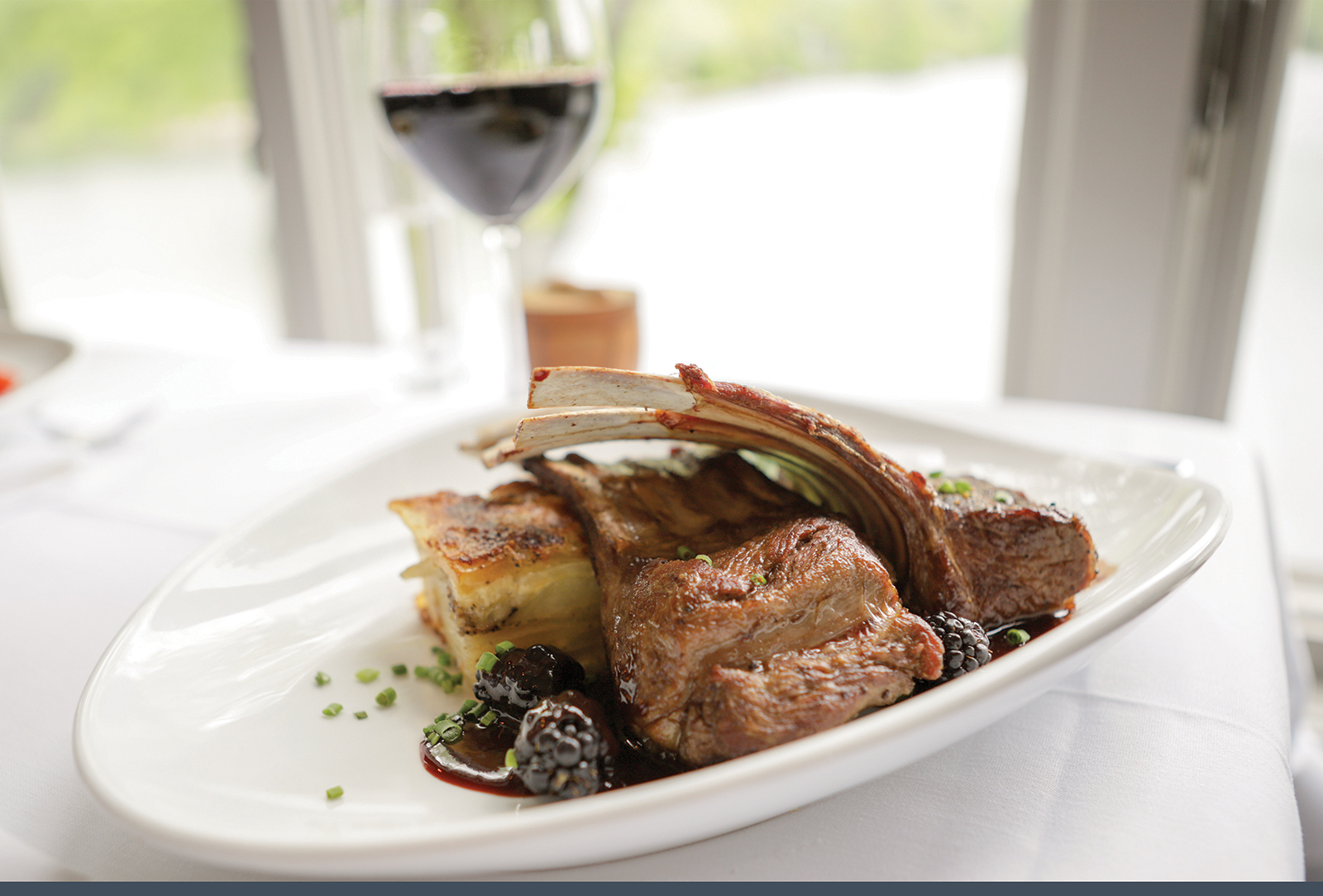 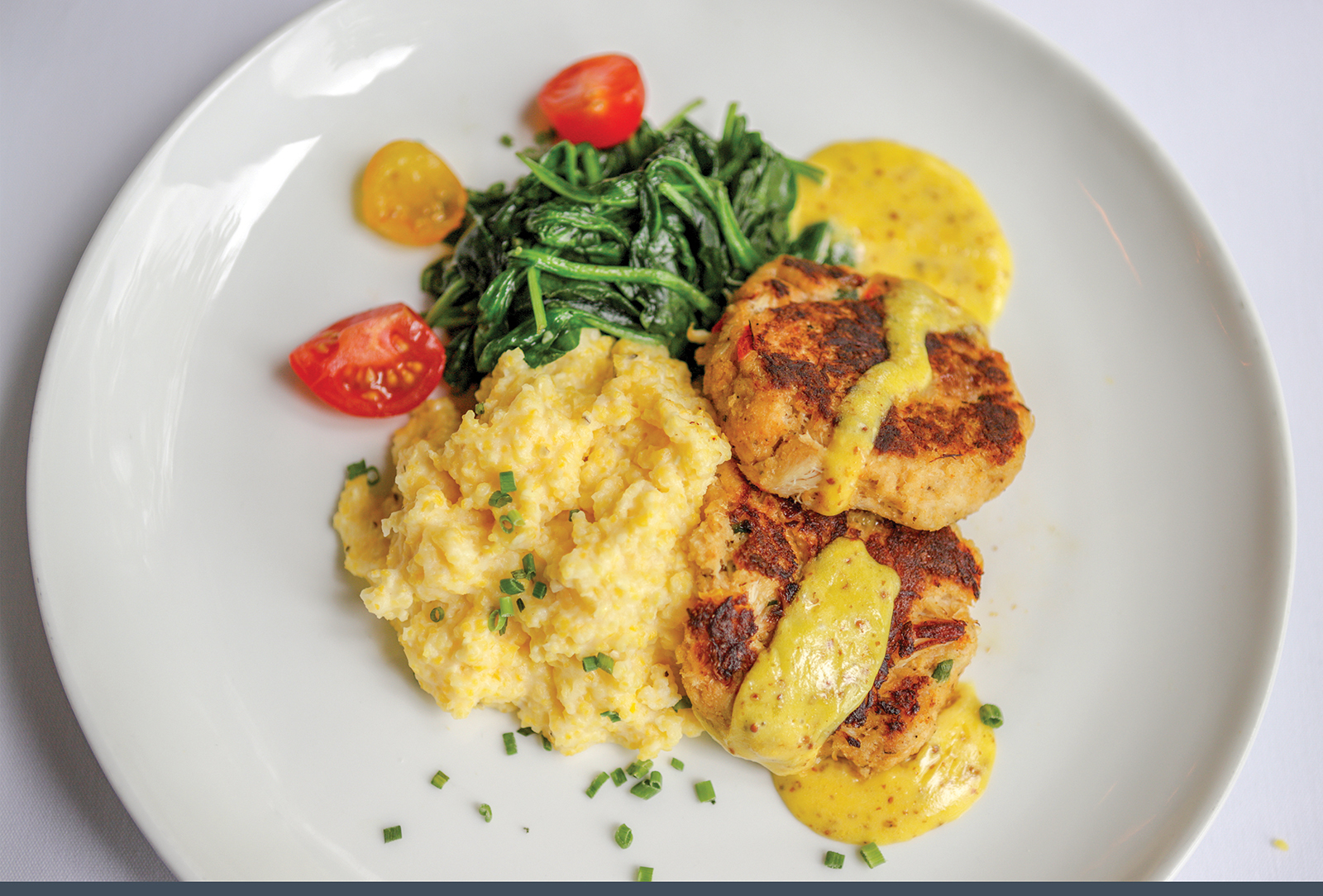 We at Laurel spend a lot of ink rhapsodizing about life on the Highlands-Cashiers Plateau. From the natural glories to the galvanizing art scene to the dreamers, they all get their moment to shine. Heck, every month I spotlight restaurants that are thriving in this most-Darwinian of environments.

But here’s the secret harbored in the deepest corners of the hearts of those of us who produce this magazine – indeed, everyone who lives on the Plateau: Sometimes you really need to get away. You’ve been cooped up too long. You hunger for different sights, different faces, different stories. And, in my case, different menus.

Which brings us to this month’s restaurant, The Lakeside Dining Room at The Greystone Inn.

You see, I’d been on the Plateau since early December, kept within its confines through all of the winter and most of the spring. I was, and I’m being charitable here, slowly going wonky and more than a bit ripe.

When Marjorie announced that I’d be visiting The Greystone Inn, I felt a little frisson of passion at the notion that I’d be traveling to Lake Toxaway. Greener pastures, a different menu.

I know some of you are saying, “But Luke, Lake Toxaway is only 18 miles from the Highlands-Cashiers Plateau. What kind of getaway is that?”

OK, you have a point. But that’s only if you’re going with hard, Newtonian reality. If you’re basing the need for getting off the mountain on something shaped in the realm of the emotional, the spiritual, well, Lake Toxaway is a million miles away.

For over 100 years, this pristine portion of mountain beauty has been offering sanctuary and respite to those in need. Back then, it was personages like Henry Ford and Thomas Edison. Nowadays, it’s celebrities like Nicole Kidman and Keith Urban, Steve Martin, and Stephen King.

(OK, when I met the latter at The Greystone Inn years ago, he was proofing the galleys to “Under the Dome.” But for a perpetual-motion prose machine like King, that constitutes a bit of relaxation.)

Tricia and I arrived at the Inn’s Lakeside Dining Room as the sun was dropping below the mountains and the lake seemed to glitter like a nighttime window display at Tiffany’s.

The room is hushed and unhurried, and just ambling to our table allowed some of the stress of the day, of the weeks, even the months, to begin to slip away.

This sensation was enhanced by the presence of our server Robert, who was observant, eager to offer recommendations and opinions, and quick with a wry comment. We luxuriated in the attention.

Of course, the cornerstone of the evening was the menu itself, and no amount of atmosphere or indulgent service would compensate for a meal that was prepared with inattention.

This is where the Inn’s seduction went into overdrive. We were treated to appetizers of Pumpkin Ravioli, Baby Kale Salad, and a cheese plate of Grub Family Cashel Blue. The Pumpkin Ravioli was lavished with Pumpkin Seed Oil and topped with Pumpernickel Caraway Crumble – forkfuls were passed around the table and savored.

But the standout was the Cashel Blue, served with Walnut Preserve and a lovingly-crafted Molasses Soda Bread. It was delicious and, this is critical to the premise of a getaway, served as the foundation of an evening of conversation. While you’re sharing something that’s the epitome of comfort food, you can’t help but open up, reveal your heart, swap stories, and punctuate the conversation with laughter. What a sweet, simple balm for the cares of the world.

Our entrees were equally dazzling – The Rainbow Trout, while not caught in the lake just beyond the dining room, was harvested from Scott’s Creek (testament to the kitchen’s commitment to locally-sourced ingredients).

Tricia’s Beef Filet was served with Buttered Brussels Sprouts and Cipollini Onions, alongside Toasted Yorkshire Pudding, Horseradish Crème, and the surprising flavor of English Ale. For an Anglophile like Tricia, this getaway dish nearly required a passport.

My entree was a different Transatlantic experience. I chose a simple Cheeseburger. But again, this was an unexpected getaway.

Once, when I was considerably younger and fearless (some would say foolish), I found myself in San Sebastián, along the Atlantic Coast in Spain. Though I reveled in the Basque restaurants on every block, when I’d get homesick I’d travel to a beachfront tent that housed a grill and three tables. A young Frenchwoman (whom I had a crush on) and her brother operated a tiny bistro that served, of all things, hamburger and hamburger au fromage. These were burgers with a Gallic twist, and between her broken English and my broken French and our passable Spanish, this was comfort dining of the highest order.

And here at Lake Toxaway, thousands of miles and decades away from that seaside town, mirabile dictu, I was served a magical cheeseburger that could have been prepared by that never-to-be-forgotten woman. It was juicy, served with caramelized onion, topped with White Cheddar (although my French chef used a Brillat-Savarin), and pocketed within a brioche bun.

This was a getaway I couldn’t have anticipated. Don’t tell me there isn’t something magical about Lake Toxaway.

Outside, a quarter-moon rose over the hills and transformed the surface of the lake into a silver kaleidoscopic display, beguiling and almost subliminal in its power.

Around our table, there was earnest conversation, and laughter, and our friend, who’s slowly emerging from the wreckage of a catastrophic year, reminded us of why we love her so deeply.

I’m not suggesting that The Lakeside Dining Room offers enlightenment with every meal. But I will say that it offers the possibility of transcendence to those seeking the original meaning of the word “refreshment.” We left with lighter spirits and the sensation of simple, unalloyed joy.

I’m pretty sure that’s always been the promise of Lake Toxaway.

After our visit, I was curious about the kitchen behind the meal. That’s when I discovered Executive Chef Sean Ruddy, a nationally-recognized culinary master whose genius helped the Greystone Inn obtain its AAA Four Diamond Rating and its inclusion as One of the 15 Top Places to Stay in the US by Condé Nast Traveler Magazine.

A wanderer by nature, Chef Ruddy left Greystone for a while, but he was lured back by the energy and ideas of new owners Geoff and Shannon Ellis.

“I’m appreciative about the new life that they’ve breathed into the place,” he says. “I’m happy to have come full circle to my roots at The Greystone Inn.”

See what I was talking about? Lake Toxaway’s properties of rejuvenation extend to the staff, even to the Inn itself.